Halloween (because I am unoriginal in my timing of posts) 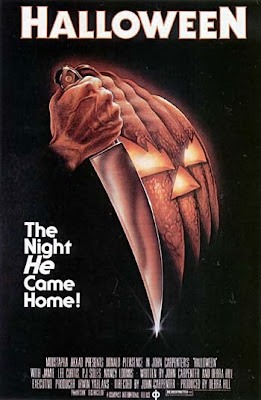 Reposted from three years ago on my old site
I just had the most delightfully creepy experience of watching Halloween in a theater last night.  In the dark, with the movie on a gigantic screen, surrounded by fellow film-lovers Halloween aficionados, the strength and quality of the film was clear, as well as its ability to genuinely creep you out.

The plot is simple: Psychopath Michael Myers escapes from a mental institution and returns to the house where he grew up.  He then stalks and terrifies a group of teenagers, lead by Laurie Strode (Curtis), on Halloween night, while his doctor (Pleasence) hurries to track him down.

Really, that’s it.  That’s all there is.  And yet from the very first shot of the film, this is a creepy movie.  In the first shot, Carpenter establishes the style he will use throughout the film; point-of-view camera work, unsteady, almost hand-held photography, meant to put you inside the unsettling head of Michael Myers.  The first shot, practically one very long take (I believe there is a hidden cut in there somewhere) is a bravado shot, starting from the outside of a house, then looking through windows at scenes on the inside, then in the house through the back, up the stairs, into a bedroom, then back downstairs and out the front door – all supposedly shot as young Michael Myers as he kills his older sister in 1963.  This camerawork establishes Carpenter as a force to be reckoned with.  He is not afraid of breaking tradition for something as simple as a teen horror flick.  It’s a breathless opening to the film, exhilarating, and, given its context, unsettling.

The point-of-view camerawork is one of the major cruxes of the film.  Nearly all the time, the POV shots are of Michael.  You know where he is and what he’s doing.  You’re him watching Laurie.  You’re him watching a young boy.  Carpenter lingers on his long shots in the first half of the film, before night has fallen and the terror escalates, as Myers watches Laurie walk down the sidewalk.  The uncomfortably long shot has you, the viewer, screaming “LAURIE, LOOK BACK!  TURN AROUND!  HE’S WATCHING YOU!”  Carpenter wisely does not cut these too short.  The sinister atmosphere is in the interminable length, not in the shadows or darkness.

When you’re not in Michael’s POV, hearing him breathe (another vastly disconcerting aspect of the film), you’re watching him appear and disappear as if from nowhere.  The young children that Laurie is babysitting keep on talking about the Bogeyman, and, well, YEAH, Michael Myers IS the Bogeyman!  He stands, staring, across the street, or through a clothesline.  The characters see him, standing and staring.  The characters look away, then look back – and he’s gone.  Where did he go?  What’s going on here?  Who is this person with the utterly unnerving blank white face and mechanic’s jumpsuit?

There is a significant relationship between Hitchcock and Carpenter in this film.  The doctor’s name is Sam Loomis (helloooo, Psycho!), the young boy that Laurie is babysitting is named Tommy Doyle, the name of Jimmy Stewart’s police detective friend in Rear Window, and then, of course, there’s the casting of Jamie Lee Curtis, daughter of Janet Leigh of Psycho infamy.  Beyond these sly references, however, the relationship continues to the overall feel of the film.  Hitchcock famously once explained how he defined suspense.  The story goes that Hitch asks us to picture a table, around which four men are playing poker.  In an action movie, he said, you watch the men play poker, when suddenly a bomb explodes from under the table.  That’s action.  Suspense, on the other hand, would start with the same four men playing poker around the table, Hitch argued, but then the camera cuts to the bomb under the table.  Cut back to the card game, then recut to the bomb.  In suspense, you are aware of the danger in advance, and the suspense is achieved because you do not know exactly WHEN the danger will strike.  That is what Hitchcock did so marvelously, and that is what Carpenter manages to achieve in Halloween as well.  Thing is, most typical horror slasher flicks follow the formula where, for the first half of the film, you meet the characters and the film establishes how normal and safe their lives are.  In the second half, the killer appears and starts wreaking havoc.  This formula is NOT played out here in Halloween.  You see Michael Myers throughout the entire movie.  There is no initial set-up; Myers is stalking from the very beginning.  You see him constantly, watching people, waiting… but what is he waiting for?  He’s clearly dangerous, but you don’t know what he’ll do or when he’ll strike.  You saw him out the window, but then he disappeared – is he in the room now?  The first onscreen death (other than Myer’s sister in the opening shot) isn’t until about two-thirds of the way through the film.  Until that point, Carpenter is literally turning the screws and ratcheting up the tension notch by notch.  We keep seeing him BUT HE’S NOT DOING ANYTHING!!  The lack of action, more than anything else, is maddening in terms of creating truly effective suspense.  You’re waiting, waiting, waiting for Myers to strike… so much so that by the time he finally does, you jump out of your seat.  Hitchcock would be proud.

There are numerous brilliantly choreographed sequences in the film where a character JUST MISSES seeing Michael Myers.  The doctor turns to the camera just when the car that you know Myers has drives by in the background.  A character on the phone looks out the window, then looks back, and we see Myers in the window – but when the characters returns to the window, Myers is gone and we didn’t see him leave.  These lovely little sequences fit beautifully in to continually remind you that he’s out there… watching you, eluding capture, waiting to strike.

The weakest parts of the film are the performances.  You can tell that Carpenter cast young actors unaccustomed to making film.  As Jamie Lee Curtis’ first film, she does a good job, but definitely has some wooden line delivery.  Laurie’s friends, though, are more laughable and much less capable.  My husband and I mercilessly mock the “Totally!” girl.  There is not exactly prodigious acting talent in this movie.

Almost more famous for the spate of slasher films it spawned in the eighties than for the film that it is, Halloween is truly a cut above the rest of its ilk.  It’s unnerving and disturbing without being bloody, gory, or vulgar.  Personally speaking, I have a relatively low tolerance for blood and gore and I seek my scary thrills not from violence but from atmosphere.  Halloween is absolutely dripping with atmosphere and creepiness.  Although the violence is downright tame by today’s torture porn standards, I would argue that Halloween is a better film and a scarier film for it, because the thrills come from suspense and not from blood or shock.  Forget the sequels; this is the original, and it’s a masterpiece.