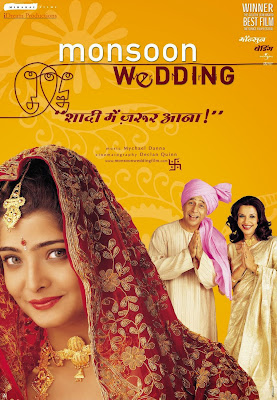 There was a time in my life, for quite a few years, actually, when my cinematic diet consisted entirely of the same fare that is Monsoon Wedding.  In the past ten years or so, I’ve stretched myself, imbibing film after film that is far beyond genres I usually watch, learning to love movies outside my comfort zone.  It’s been a wonderful experience, and one that I wouldn’t change, but every now and then, it feels incredibly comforting to settle down with a frothy little romantic dramedy.  Seeing Monsoon Wedding for the first time took me back, man.

Aditi (Das) is getting married.  Her father (Shah) is stressed, the wedding planner (Raaz) is an incompetent goofball, and her cousin Ria (Shetty) seems to be depressed.  Aditi herself isn’t terribly jazzed about the arranged marriage to an Indian man from Houston, Texas she’s never met, especially as she’s still in love with her married ex-boyfriend.  As the scores of relatives descend upon the family house for the days of wedding ceremonies, romance blossoms in unlikely places just as old family secrets are revealed.  Nothing like a wedding to bring out the best – and worst – in people. 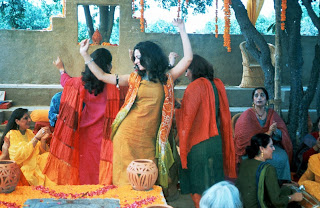 Undoubtedly, the central theme of Monsoon Wedding is the universality of the Crazy Family.  This is a film cut from the same cloth as My Big Fat Greek Wedding, with a cast of cacophonous characters doing their best to confuse you with their identities and separate plights.  There are several storylines continually being developed by the rather large cast, but in the end, it doesn’t matter, because it’s really just about this family muddling through.  Wait, there’s one scene where the father mentions money problems but it doesn’t really go anywhere?  No worries.  The story of the younger brother being sent off to boarding school feels markedly unresolved?  Don’t trouble yourself.  Just as in real life, not every tangent can find a conclusion in the time span of a long weekend.  Monsoon Wedding is about family, plain and simple, and how everyone in the family carries their own cross to bear, but ultimately love, be it romantic or familial, finds a way to triumph.

Multiple plotlines and large casts can feel confusing, and when you add in the fact that Hindi, Punjabi, and English are all spoken in Monsoon Wedding, sometimes even in the same five minute period, the film constantly feels as though it’s teetering on a knife’s edge.  Credit where credit is due, then, to director Mira Nair, who manages to keep all the balls in the air and continually moves the film forward by focusing on Aditi’s wedding ceremony.  I’ll admit I was a bit overwhelmed during the first half hour of the film, but when I realized that this is a classic example of ensemble casting – and when I turned on the English subtitles for the English lines – everything started to fall into place.  I might not have every character’s name down pat, but by the end, I knew who was interested in whom and how the conclusion benefited which person and why.  Everything comes out in the wash. 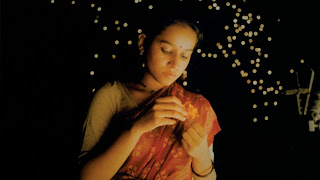 The romance in Monsoon Wedding was rather lovely.  Although overshadowed by the focus on Aditi’s wedding and her angst about an arranged marriage and her ex, my favorite of the multiple romantic plotlines was easily that of inept wedding planner Dubey and household maid Alice.  Aditi’s family is most definitely upper middle class, if not upper class, and this was the one part of the story that dared delve into class distinctions in India.  Dubey is shown to live in a tiny apartment with a nagging mother, and Alice is the maid.  Watch her face when she first accidentally bumps into Dubey and he says “Forgive me.”  You can read her shock that she wasn’t blamed for the accident, that it wasn’t assumed it was her fault.  Right from that very first moment, I knew how this romance would blossom, but I didn’t care that it was already spelled out.  I wanted to watch these two, whose lives were definitely a bit harder and rougher than Aditi’s family, find their little bit of happiness.  The fact that Aditi’s family includes them in their own wedding ceremony at the end of the movie is heartwarming.

Like every decent romantic dramedy out there, there is more than a whiff of the fairy tale in Monsoon Wedding.  Things wrap up a little too nicely, especially in Aditi’s plot line, to be believable.  At all.  Not every plot line is based on romance, but even in the more serious story line, things seem to resolve a little too nicely.  But you know what?  I’m okay with that.  I wasn’t expecting hard-hitting realism in a story about an Indian upper class wedding.  It’s nice, every now and then, to bid adieu to any semblance of real life and live in a world where everyone gets their happy ending.  Like I said, I used to subsist on a cinematic diet of nothing but films like this.  I welcome the fairy tale, the fantasy, the happy ending. 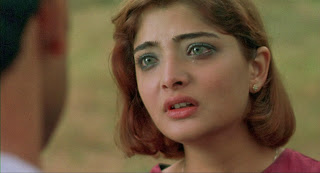 And yet what really makes Monsoon Wedding work is that it is a fairy tale masquerading as a real life story.  There is a great blend of the two, and although the story tiptoes near the borders of Bollywood excess, it never pushes over the edge.  Sweet without being sickening and with just enough emotional poignancy to make it feel substantial, Monsoon Wedding achieves its goal.  It’s diverting, escapist, well-made fun.