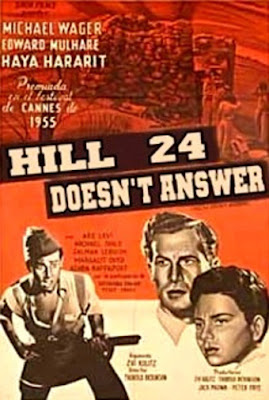 Of all the films I’ve yet to see from 1001 Movies, this is undoubtedly the film I’ve been searching for longest.  This is not a readily accessible movie, and I have a feeling I wouldn’t have seen it at all save for Chip’s from Tips from Chip resourcefulness in somehow tracking down a copy.  It was released on DVD for the briefest of moments, but only as part of a Jewish cinema special set, and that was fairly cost prohibitive before disappearing entirely.  So frankly, I’m glad I just got a chance to see this one, full stop, because it’s been so hard to find.
But funnily enough, by the time I finished watching it, I was glad I’d seen it because, well, it’s actually rather good.  (If I sound surprised by that, it’s because I’ve learned that the films that are hardest to track down are usually unavailable for a REASON.)

Set during the fighting between the Arabs and the Israelis in 1947, the movie starts with the information that a United Nations dictated cease-fire will take effect at 5:45am.  Four patrol soldiers fighting for the Israeli cause are given the orders to try to take Hill 24, a strategically advantageous position, before that time so that when the border between Israel and Palestine is finally decided, Hill 24 will be Israeli.  We meet these four soldiers as they flashback to events that lead them to their current position.  There is Jim Finnegan (Mulhare), a British government worker originally stationed in Israel as part of the British guard who ended up staying because he fell in love with an Israeli woman.  There is Allan Goodman (Wager), a Brooklyn tourist who came to Israel to see the sights but stayed because of an emotional connection to fight the good fight with his people.  There is Esther Hadassi (Oved), a young Israeli woman who is raring to fight and will not let her gender keep her down.  Finally, there is David Airam (Lavie), a multilingual Israeli who has the most combat experience out of all of them and has seen some pretty horrible things. 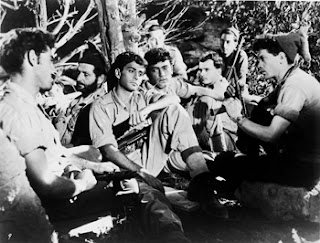 The film is divided into three mostly even sections as we learn about Jim Finnegan, Allan Goodman, and David Airam in turn.  Esther’s story is mostly tied in with that of Allan.  You’ve seen this structure of a film before, as each character in turn flashes back and tells “their story.”  While not exactly my favorite narrative technique of all time, such a device serves to move the film along by automatically sectioning it into three distinct acts.  As each character has a (mostly) fully formed story to tell, we have three beginnings, three middles, and three ends, all of which are bookended by the film as a whole.  Frankly, it works here.

And a big reason why I feel it works is that I thought the film kept getting better with every successive story.  Jim’s tale, the one we kick off with, feels like I’ve seen it before.  There’s nothing wrong with it, per se, but it felt like a fairly rote romance between two opposites.  Just as I was beginning to tire of Jim, though, we switch over to Allan.  Allan’s tale is very different; he goes to Jerusalem for a guided tour of the Old City and wants thrills and excitement.  Somehow joining up with the freedom fighters along the way, he finds himself caught in a firefight at night between the Arabs and the Israelis, and oh so quickly, his dreams of thrills disappear as he encounters firsthand the horrors of war.  Winding up injured and in the makeshift hospital, he has a crisis of faith with a rabbi and his desperation only grows.  Whereas Jim simply fell in love with an Israeli girl, Allan goes through a much more interesting emotional rollercoaster.  Yes, it starts to feel a bit like propaganda (this was the first film fully produced in the new country of Israel), but that’s to be expected, and I was still invested in Allan’s transformation. 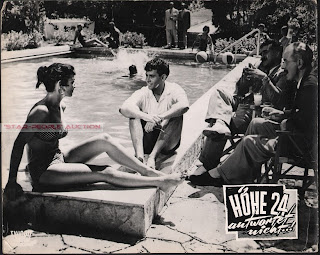 And then we tote out the brief, but easily most potent, story of David.  David’s flashback, unfortunately the shortest back story of the lot, was gripping.  He recalls a previous encounter in battle in Israel when he found himself rescuing an enemy soldier who turns out to be German.  This segment was absolutely riveting, and when the film transitions smoothly from David’s powerful tale to the more nationalistic yet still powerful finale of the film as a whole, Hill 24 Doesn’t Answer definitely ends on a high note.  Rare is the film that I feel gradually improves as it goes; if it starts rather slow, usually it ends rather slow.  But no, Hill 24 Doesn’t Answer crescendos up to a very strong ending.  And I’ll add here that I should have expected it, as the film opens with a wicked punch to the gut.  The film makes absolutely no bones from the get-go about delivering a fairly bleak and powerful tale, but managed to lull me into complacency with Jim’s rather predictable flashback. 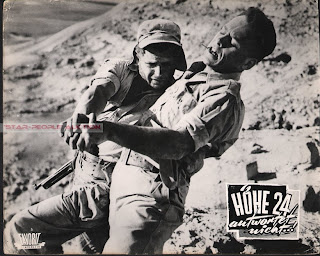 I couldn’t help but be reminded of several other films while watching Hill 24 Doesn’t Answer, the two most significant of which were made prior to Hill 24.  I really can’t help wondering if Thorold Dickinson was heavily influenced by The Third Man and All Quiet on the Western Front, or if the similarities are honest coincidences.  The Third Man’s influence is most notable in Jim’s flashback.  In it, we see that while the British have some sort of control on the turmoil-ridden city of Haifa, there are rebel fighters at every turn.  There is so much rubble and confusion and a sense of barely-withheld anarchy that one could easily transplant Jim’s Haifa for Harry Lime’s Vienna.  All Quiet on the Western Front, on the other hand, shows a very heavy influence in both Allan’s story, as his transition from thrill-seeking naïve tourist to war-hardened, disillusioned soldier is played out in very similar terms to that of Lew Ayres’ Paul.  And in the final segment of Hill 24, where David tells his story, all I could think of, ALL I COULD THINK OF, was the scene in All Quiet on the Western Front where Paul is trapped in a bomb crater with a wounded French soldier, the enemy.  There are imprints of All Quiet on the Western Front all over this film.  I don’t necessarily think that a bad thing – All Quiet on the Western Front is an amazing film – but derivative is still derivative.

Really, if I’m being honest with myself, I expected something far worse from Hill 24 Doesn’t Answer.  I expected this film to be in the book for the sole reason that it’s the first Israeli film, and not on the benefit of the film itself.  But I was wrong.  Hill 24 packs a punch.  Not a huge punch, sure, but it’s there.  It’s a bit of a shame this film is so hard to find.

Arbitrary Rating: 7/10.  Oh, and did I mention that the print SUCKS?  It’s hard to watch – not because of the film itself, but the graininess is almost too much and definitely detracts from the viewing experience.
Posted by siochembio at 11:53 AM