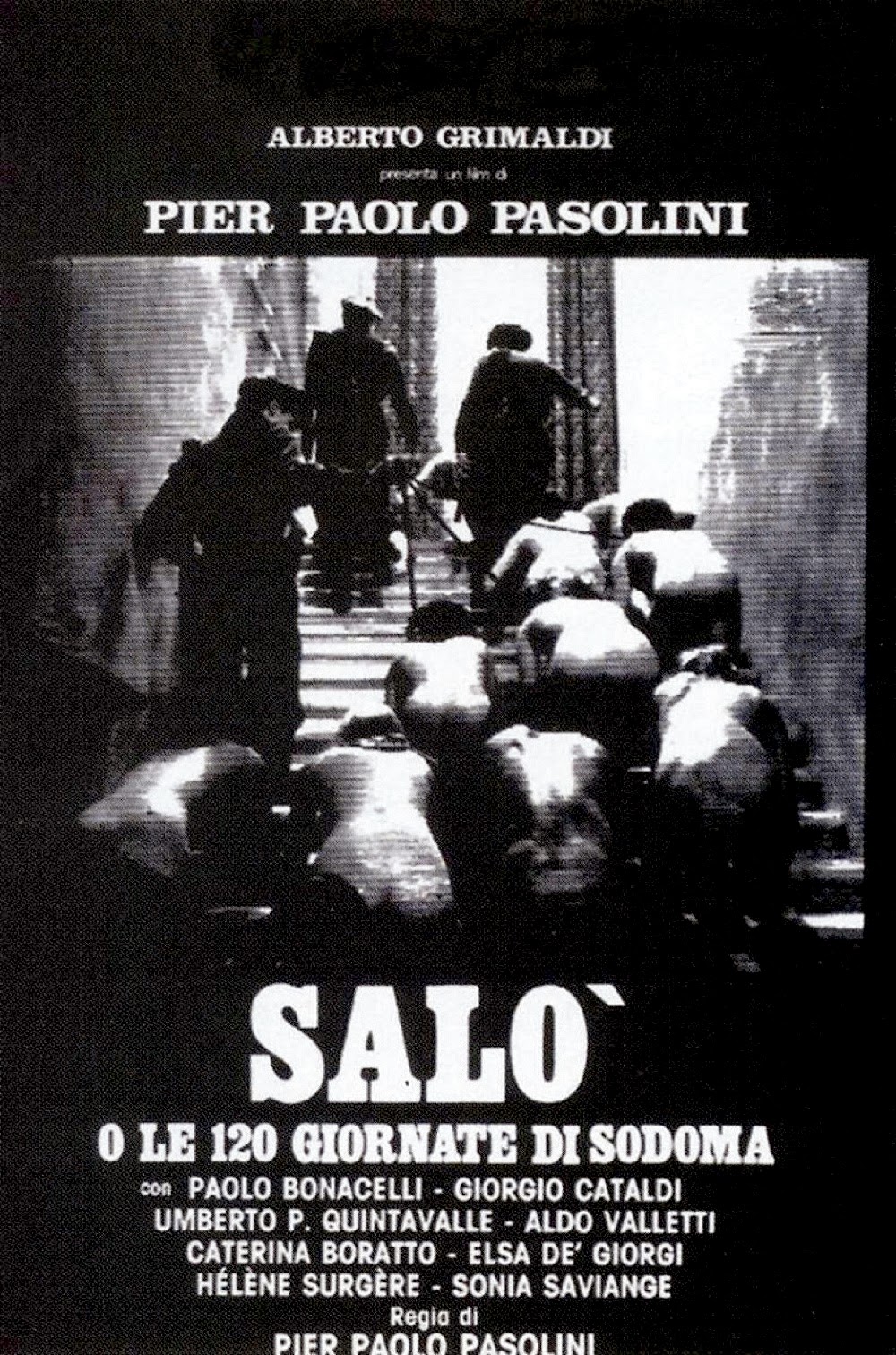 Salo, or the 120 Days of Sodom
1975
Director: Pier Paolo Pasolini
Starring: the most uncomfortable two hours of my life.

My usual modus operandi for writing these little blog pieces is as follows:

1. Watch the film in question, giving it my full attention, and thinking critically about what I can say about it as I watch it.
2. When I feel ready to write about the film, be it immediately following the viewing of the film or a few days later, put the film on for a second time and have it on in the background while I write so as to remind me of scenes/moments/thoughts I want to comment on.

I shall not be holding to this strategy for today’s film, and the reputation of the film in question is more than enough to tell you why.

The story unfolds in 1944 Fascist Italy, where several powerful men, accompanied by some aging female prostitutes and young men that they have decided are their guards, kidnap eighteen young teenagers and take them to an estate.  What then proceeds is a non-stop sadistic (fitting, as it was based on a story originally penned by the Marquis de Sade) horror story, as pain, rape, humiliation, and eventually torture and murder are in store for the unfortunate teenagers. 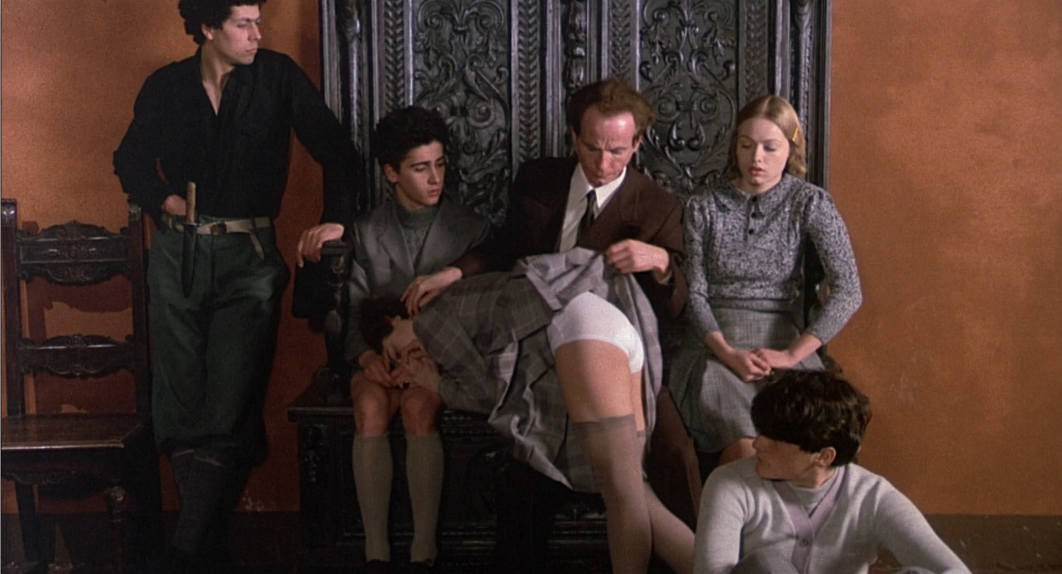 Ladies and gentlemen, I wear it as a fucking badge of honor that the one and only time I saw this film was in a theater.

Why?  Well, back when I was borderline obsessed with getting through the 1001 Movies list, Salo was unavailable on DVD.  Or VHS.  Nowhere could one find a copy of it at a reasonable price, and I wasn’t about to pay two hundred bucks for an out of print laser disc copy from ebay.  Turner Classic would hardly air this film.

And then the Dryden, as it always does, came to the “rescue.”  In the summer of 2007, they had a screening of Salo.  What was slightly unusual about the screening is that the Dryden took greater pains than normal to warn the audience about the nature of this film, and had a strict “No one under 18 admitted” policy.

So, because Salo graces the pages of 1001 Movies and I had no other options, I traipsed out to watch a film I knew would horrify me.  Fantastic.

The Dryden is not an enormous theater.  It seats 500 and has two sections, an orchestra section and a balcony.  The screen itself is moderately sized; it’s not a giant screen in the slightest.  I mention this because I nearly always choose to sit in the orchestra section to feel closer to the film.  Because the screen isn’t enormous, if I sit in the balcony, I feel too far-removed from the film to have that immersive movie theater experience.

Although I hadn’t seen Salo before that night, I knew its reputation and before I sat in my normal spot (back row center orchestra), I paused.

Did I *really* want to be close to THIS particular film?

I physically distanced myself from this film before I had even seen it, and god, I’m glad I did. 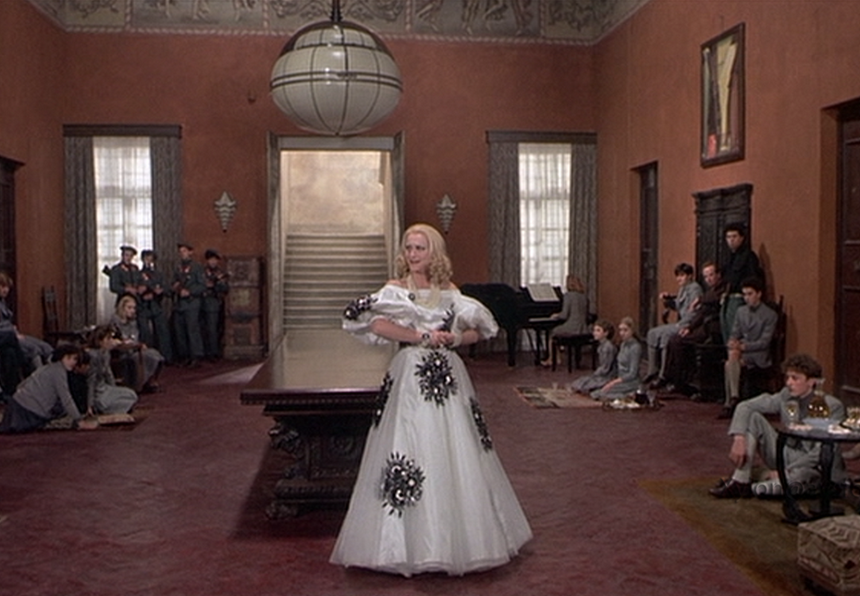 What do I remember of Salo?  I remember sitting in that darkened movie theater and cringing.  Physically cringing.  I didn’t go quite so far as to put my hands in front of my eyes, but I did start pulling a turtle and trying to hide myself in my hoodie, my body curling in on itself as a defense mechanism.  I grimaced, I tried to turn away, and then it eventually became a question of simply making it through the movie.

I remember never having felt so goddamn uncomfortable while watching a movie.  This was a level of discomfort that no war movie, no bizarre experimental film, and no film that has anything to do with pets (all of which are my least favorite kinds of movies) had ever put me through.

I remember it finishing, the lights coming back on, and thinking, “Thank god.  Time to get the fuck out of here.”

I am perfectly fine with never seeing this movie again.  Ever.

Hell, even reading a detailed description of the plot on Wikipedia was too much for me, and I wound up only skimming it.

I mean, what else am I supposed to say about a movie where a girl is punished for crying by being made to eat human poo?

The other film I think of when I think about films dealing with humiliation is John Waters’ Pink Flamingos.  That’s another film that I don’t enjoy, but I’ll say give me Pink Flamingos over Salo any day of the week.  At least Pink Flamingos is rife with camp and tongue-in-cheek attitude that lessens the feeling of horror.  Sure, it’s obnoxious, but at least it has an intent of comic outrageousness, and that coats the humiliation just a bit, making it easier to get through.

Pasolini is so damned unapologetic about what he puts up there on the screen in Salo that it feels as if he is purposely torturing the audience as well as the cast of characters.  There is no attempt on his part to “make it go down easier.”  Nope, he’s saying, this material is hard, and I’ll be danged if I make it easier for you.

Salo is getting a low score for me, but I’m not giving it the lowest possible score, and here’s where, oddly enough, I feel like I need to explain why.  (Funny, me explaining why it won’t actually get a one out of ten.)  Because, as repugnant a film as it is, I don’t feel as though it’s repugnant just for funsies or by accident.  There is intent here, and there is anger here, and there is passion here.  Underneath all the horrible scenes set to film in Salo, Pasolini has a message about corruption and power and perversion.  It’s not pretty to sit through, but it’s undeniably there.  What’s more, it’s well-constructed film.  Awful, yes, but Pasolini knew what he was doing in terms of cinematography.  There’s a reason that this is called “an art film,” because it honestly looks like art.  Sometimes horrible, horrible art, but art nonetheless.  So I must give Pasolini his due and admit to Salo, despite its awfulness, is well-imagined awful and made with the intent of being awful and with purpose.  (I’m giving the side-eye to films like Vinyl which seem to have absolutely no intent whatsoever here…)

Did I have to see Salo before I died?  I’m not sure.  Frankly, given the enormous reputation of the film in film circles and the immediate reaction the film gets whenever anyone brings it up in any conversation, I begrudgingly admit to being glad I’ve seen it, if for no other reason than I can meaningfully participate in said conversations.  Do I need to see Salo again before I die?  HELL NO.

Once was more than enough.

Posted by siochembio at 6:06 PM

Email ThisBlogThis!Share to TwitterShare to FacebookShare to Pinterest
Labels: 1001 movies, 1970s, 1975, 2 out of 10, foreign, italian, pier paolo pasolini, salo or the 120 days of sodom